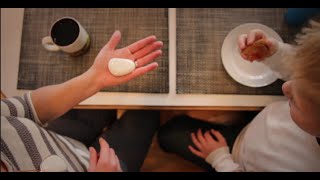 An entirely new way to communicate.

Smartstones® Touch™ is a wearable “status-casting” device that enables you to send messages by touch and gesture, keeping family members and friends in touch and in step with you. It’s small, screenless, and you can take it anywhere. It might even save your life.

“This world of non-verbal communications is going to be really hot. It’s what people will be talking about next year. It’s not just fitbits and data logging, but how are we connecting with other people.” – Andreas Forsland, founder & CEO of Smartstones.

Smartstones Touch are the world’s first (patent pending) wearable sensorial communication devices that let people send simple status messages, automatic “remind me”, “find me” alerts, all with simple taps, swipes and gestures. They are wearable devices that keep family members and friends closer than ever, enabling them to connect with a single touch.

“I have never seen anything like this before, I’ll give you that. It’s pretty wild.” – Kevin O’Connor, founder of Doubleclick

The company was conceived at the Startup Weekend in 2013. Since that time they have won many awards, including Top 5 Finalist, Silicon Valley Boomer Venture Summit, Best Physical Product, Startup Weekend and Most Crowdfundable, Startup Weekend. On February 10th, they launched a massive campaign on Indiegogo and look poised to make a major mark with their first product. Look at the campaign here. Smartstones is another example of the cool stuff that’s being produced locally. 805connect is thrilled to have them as members and wish them a lot of success with the fundraising and final development and production of their first product.