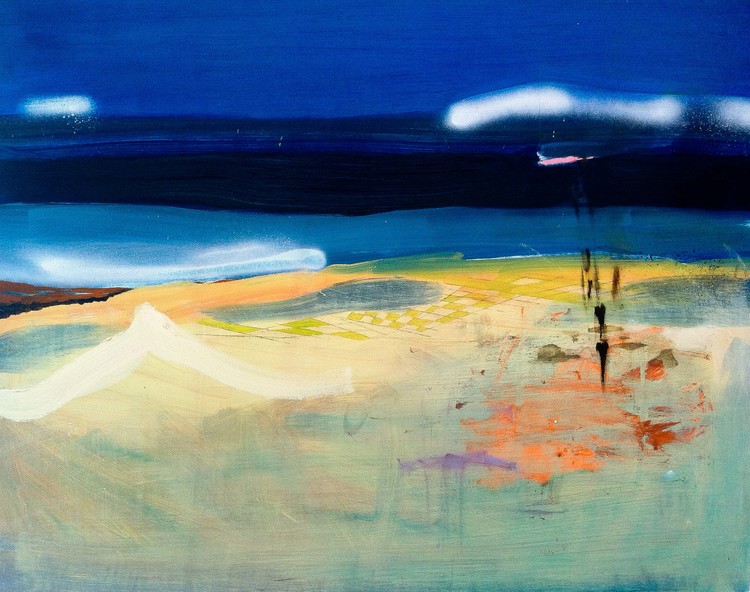 Courtney Jane Miller Landscape Architecture is sponsoring a summer art series at their Canon Perdido design studio. DROUGHT RESISTANT will feature the works of three women artists who maintain studio practices in Santa Barbara. Each artist will present their work via a solo show for one month during the summer from June to August. The first artist in the series will be Cathy Ellis opening in June.

Cathy Ellis is known for her exceptionally competent compositions and dramatic color combinations.  Her development of subject matter reveals a thoughtful mind at work in the sloppy sticky edges of memory and mistake.  The work lures viewers into it, leaving room for them to fill in the back-story and to build the associations of meaning around the elegant and yet clumpy figures and landscapes.

Cathy Ellis received her BFA from Sonoma State University and her MFA from the University of California, Santa Barbara in 2014.  She has exhibited nationally, including exhibitions at The Museum of Contemporary Art in Santa Barbara, the Minan Gallery in Los Angeles, Cal State Channel Islands in Camarillo, 186 Carpenter in Providence, RI, the Sonoma Valley Museum in Sonoma, SFMOMA Artist’s Gallery, Trillium Press and Southern Exposure in San Francisco.  She is currently a Teaching Fellow at the College of Creative Studies, University of California at Santa Barbara, and the 2014 winner of the Howard Fenton Award for Painting.

The three artists in DROUGHT RESISTANT, Cathy Ellis, Megan Mueller, and Jenalee Harmon, are contemporary experts within their individual disciplines and regularly show their work nationally. The series is curated by Patrick Melroy. The idea for DROUGHT RESISTANT came from a creative conversation between CJM::LA principal Courtney Miller and several artists within the community. The substance of the discussion surrounded the desperate need for more quality venues for contemporary art within the very rich cultural center of Santa Barbara. Miller engaged curator Patrick Melroy who in turn invited three artists who have persevered through the shortage of show space and continued to advance their artistic practice despite not having a lot of room to spread out. The title of the series was entirely the idea of artist Megan Mueller.

*Patrick Melroy is the podcasting partner of 805connect and co-produces the show 805conversations with 805’s Ambassador, Mark Sylvester