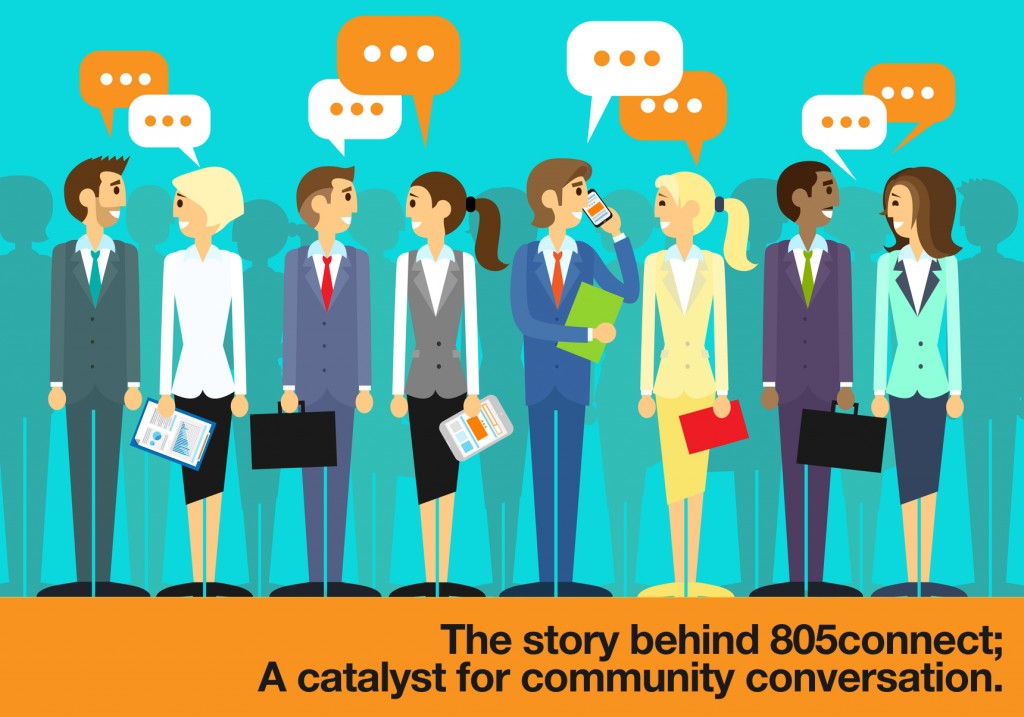 Eighteen months ago, an idea was born  for a project that would connect people and their businesses within the 805 region.

A series of conversations in late 2013, championed by Senator Hannah-Beth Jackson, in support of her JEDI (Jobs and Economic Development Initiative) project, proved to be fertile ground for the concept of 805connect. Mark Sylvester, the CEO of introNetworks and (now) Ambassador for 805connect, mentioned that many of the people and organizations represented neither knew of or were connected to each other. Yet they had all come together to add their voices to a conversation about economic vitality along the 101 corridor. Participants came from foundations, schools, the private sector, the public sector including local city halls and entrepreneurs and business leaders in the region. It was obvious to all in attendance that stronger connections in the region should be nurtured.

It became clear over the next several months that each of the organizations wanted to collaborate, but were not sure how their efforts intersected. Ironically, for such a small group of communities, there was a lack of awareness of the collective efforts in the region. Talking with many people who had attended the early meetings, Mark proposed a new project that would provide the connective tissue that the region needed, a site where the 24 cities, 3 counties and hundreds of organizations that support the economic ecology could get to know one another. It was at a gathering of all three counties, hosted at UCSB, that the idea, which became 805connect, was publicly introduced and the first alliances were forged. The partnership with Antioch University’s Guy Smith, Chair of the BA program, helped guide early decisions as Guy and Mark formed the initial working group for the project.

The Santa Barbara Foundation saw this early effort as a positive sign towards a collective action that would help them in their mission to lead and seed efforts to improve economic vitality in the region and became the first funder of the project.

Since it’s initial launch in March of 2014, 805connect.com has grown to include almost 1,400 members. Over 60 organizations have come on board to sponsor or partner with the project and add their support.

The analogy of connective tissue has resonated with everyone who has taken time to understand why 805connect exists. A primary goal of the project is to understand who’s doing what in the region and connect them and their projects. Getting to know the people behind each business and organization becomes an essential first step for the effort to be successful.

The 805connect website was designed with a unique profile that asks the questions: Where can you help? Where do you need help? Where is your focus?  What experience do you have? Using this information, members have been able to make connections with like-minded people to find new customers, partners and advocates for projects they’re working on.

Now that there’s momentum on the site, it becomes easier to see what people are passionate about, where they would like to focus their efforts and how they could add value to a series of community conversations.

In the coming year 805connect will continue to be a catalyst for conversations in a wide variety of areas. Working with our partners we are helping to pull the right voices together to talk about issues that are important to all of us. With the 805conversations initiative, we are bringing together experts to talk about skills that help member businesses prosper. With 805Live we are co-producing events like the recent   TEDxSantaBarbaraLive that bring people together for in-person conversations.

Stay tuned. 805connect has experienced a successful first year and has an agenda that will keep us busy for the foreseeable future. We appreciate you for being a part of this innovative project.  If you’d like to learn more about the impact the project is having on the region, drop Mark a note, he’d love to hear from you.