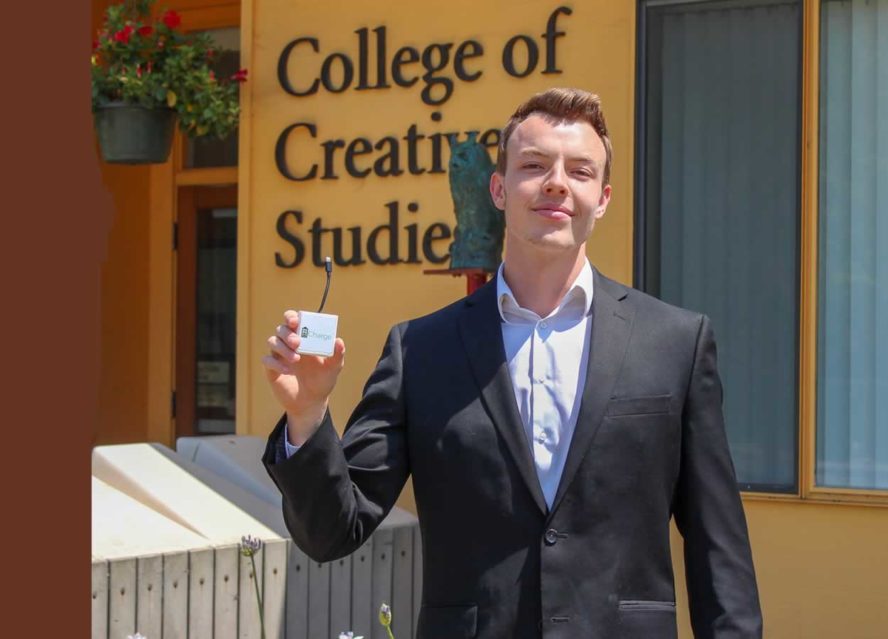 Alex Cicconi-Kasper, CEO of +Charge, is the winner of the recent Startup Weekend, held in February, at UCSB. He’s a second-year College of Creative Studies student and Physicist. He and his team have developed a single-use cell phone charger.

In this episode, Alex goes into detail about how they worked as a team over the 56 hours of the weekend to come up with a concept, test market the idea, get feedback and secure a team to mock up the idea, which led to them winning the weekend.

805Conversations is supportive of the efforts of the various Startup Weekends in the region and offers a podcast interview to help these young companies get some early publicity and gives the new leadership a chance to hone their presentation skills for the media.

The following article appeared on the UCSB Center for Creative Studies page in June 2018. They did such a great job, and we thought it would be an excellent companion piece to the podcast.

“No one, especially millennials, wants their phone to run out of juice. But often finding an outlet to charge your phone is not feasible. Alex wants to alleviate this strain and make charging your phone easy and accessible. He has spent the last few months developing a recyclable, single-use smartphone charger for his startup company, +Charge.

The idea for this product originated this past February when Cicconi-Kasper attended the Santa Barbara Startup Weekend and formed a team with two other attendees. Startup Weekend is a series of competitions that take place in over 150 countries and is held over a three-day period throughout the year. One of the competitions is held in Santa Barbara. During the three days, participants form teams and develop a startup idea that they pitch to a panel of judges on the final day.

The goal of the Startup Weekend competition is for participants to validate their concepts. Cicconi-Kasper’s team took this a step further and was able to bring their idea to the streets of Goleta and Isla Vista to see how the community felt about their smart-phone charger idea. According to Cicconi-Kasper, this strategy was very successful. He elaborated: “We asked some open-ended questions, including ‘is this something that you would use?’ and ‘Would you buy this?’” They also sold 140 presales during this community outreach. “The pre-sales were probably our biggest strength,” added Cicconi-Kasper, “This competition is all about selling your product.” The successful market test of the product earned the attention of the judges during their final pitch and propelled them to the win in the weekend-long competition.

Cicconi-Kasper engineered the +Charge prototype. This consisted of creating a circuit board and getting it printed by a manufacturer. They then attached the circuit board to a battery and enclosed it within a 3D printed case with an iPhone connector. The device is recyclable, which is a big plus for consumers and the environment.

Cicconi-Kasper and his +Charge team have continued to develop their product and expanded their venture since Startup Weekend. “We’re certainly taking +Charge on to the next level and have signed our first six deals with local vendors to sell our first 90 units, as well as sold 205 units in pre-sale direct to consumer,” Cicconi-Kasper said. The end goal is to have their product in every convenience store, event venue, and amusement park in the country.

CCS has played a significant role in Cicconi-Kasper’s journey to this startup competition. He explained, “CCS has been instrumental in helping me learn the right electrical engineering skills. I was fortunate enough to have the flexibility to take analog electronics. I couldn’t have designed the product without taking the class. That class taught me everything I needed to know.”

Although Cicconi-Kasper is the only +Charge team member left from Startup Weekend, he has recruited six new co-founders, including three electrical engineers, two mechanical engineers, and a physicist. This new team, which consists of entirely UC Santa Barbara students, has been busy raising capital for their young company. So far they have acquired $5,000 in seed capital and are currently negotiating $65,000 of additional capitalization with a Santa Barbara venture capital firm. They have also secured proprietary intellectual control over both the brand and the name. Cicconi-Kasper is looking forward to the future of +Charge, saying, “Things are going very well, and I’m super excited for what the future holds.”